Unfortunately, I’m home from work today because I’m sick. Boo. However, fortunately for you, that means I have plenty of time to tell you about Crystal Bridges Museum of American Art.

I was most fortunate to be able to visit Crystal Bridges with my family on Christmas Eve this year. (Ironically, I was sick then too. What is the point of flu shots if you still get a bazillion colds!? Anyways…) I was really impressed with the museum. It is now one of my favorite museums that I’ve seen in the US. The museum is the baby of Alice Walton, one of the Wal-Mart Waltons, who wanted to bring a world class museum to Arkansas. When plans of this museum surfaced, and Alice started buying up tons of classic American art pieces, critics in New York and LA complained saying, why take these great works of art to Arkansas? Who will go see them? Why should we have to go there?

However, the museum opened on 11-11-11 to great success. The first two months it was open, you had to reserve a time slot to visit because so many people wanted to go. Now it is open to the public and free to everyone for the next ten years. Ten Years! The critics who visited the museum have been eating their words. Not only is there an amazing collection of artwork, but the architecture of the building itself is stunning. 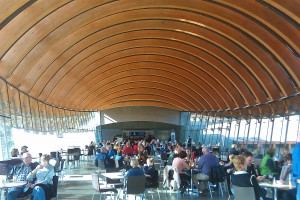 This is the main hall when you first enter. They have a restaurant and cafe on site. Perfect to grab a coffee before you start!

This is the view of the second main hall from the first. You can see that the museum is built over a stream in the woods. It is beautiful how it is surrounded by nature. I want to see it again in the spring, as you can see right now, there isn’t a ton of water underneath.

One of the coolest parts? They let you take pictures! So, I was able to take photos of many of my favorite pieces in the galleries. I’m going to share them with you today. Obviously, they were taken with my phone and aren’t great, but I hope to give you a sample of the collection. As a note, if you click on the photos, you will be rewarded with larger images. Check them out!

The main galleries are laid out in a timeline of American art from the early 1800s all the way to modern art. I didn’t take an photos in the early galleries, because I didn’t realize I could. But this was one of my favorite things that I saw in the early galleries. I was entranced by the details and the layers. The way that you could see through the waves to what was behind and the use of color is amazing. Be sure to click on this one to see a bigger and better image.

Along the Shore by William Trost Richards 1903

This one I thought was just beautiful. The details and delicacy were stunning. Don’t you just wish you were there with them in the sunshine? 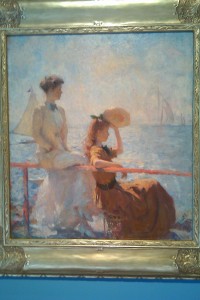 This one was another that I loved the detail of. Possibly my favorite still life of fruit I’ve seen. Don’t you just want to grab one and eat it?

Basket of Peaches by Joseph Decker 1885

This one I fell in love with because of the woman’s attitude. She is just so sassy. And this is considered a wonderful use of black on black, as her dress and the background are so similar and yet so distinct.

Jessica Penn in Black with White Plumes by Robert Henri 1908

Now we begin moving into more modern and abstract artwork. I loved this one, as I tend to have an affinity for sailboats anyways.

I loved the lines and color palette of this one. 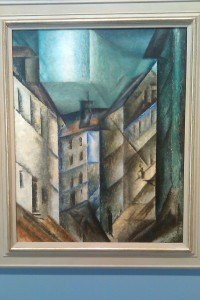 Needless to say, with this next one, it was the colors that got me. However, it is fun to look at more closely, as it is supposed to depict a cafe scene. You can make out a woman with a hat and a man and a glass if you look closely. Also, the word in the title, Synchromy, was part of a movement this artist created called Synchromism, which means “with color”, just as the word Symphony means “with sound”.

Now, at this point the gallery hits the world of modern art proper. There was a Warhol and a Roy Lichtenstein piece and lots of fun and odd things. But, none of the pieces in this hall really moved me. It wasn’t my favorite Warhol. This one was of Dolly Parton and was lovely, but not my cup of tea. However, for some reason I kept getting drawn back to this one. I’m not sure why, but it had great appeal for me. 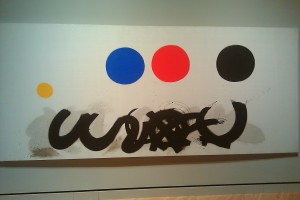 Ok! So those are the photos I took from the main collection. Then they also had a separate collection called “Wonder World: Nature and Perception in Contemporary American Art”. There were some great things in this hall as well. 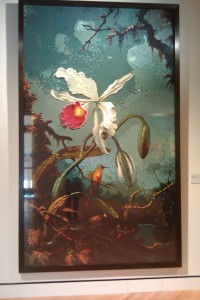 Now this orchid one was a really cool piece. The thing I liked best about it though, is that it was made through paper collage. It was then copied and this is a digital image, but it still had all the depth of image that the original collage would have had. Here is a close up to show what I’m talking about. And by the way, this thing was huge.

What is not to love about this one? Angry seagull flying through an explosion? However, seeing this painting in real life is enough to give you nightmares. That is one scary bird.

This one was one of my mom’s favorites. It is an excellent example of photo realism. It is crazy to look upon and think that someone painted it. The detailing on the rail of the ship was what really made it for her. It really looks like a photo. 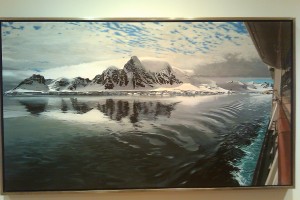 I loved the delicacy of the feathers in this one. They float through the air and almost out into the room. 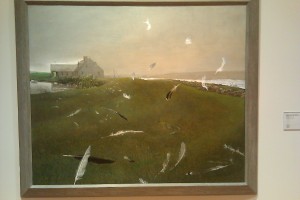 And the final room I visited had two Soundsuits by Nick Cave. I’ve seen a couple of his works before and they are just so whimsical and playful. I wish they would just start dancing around the room. 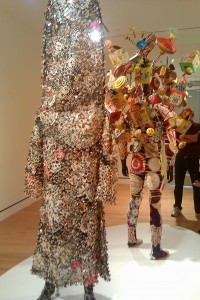 Soundsuit by Nick Cave 2010 (both are named the same)

I hope you’ve enjoyed my mini tour of Crystal Bridges and are now inspired to visit it yourself. This is but a tiny, tiny sampling of what the museum has to offer, but they were some of my favorites.