Ah, the pasty. And when I say pasty, I mean the stuffing filled pastry, not the thing that strippers wear. 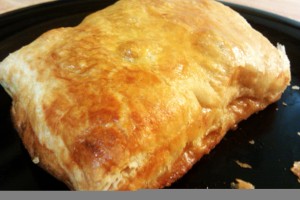 I love pasties. I fell for them when I lived in London and they were cheap and available everywhere. Basically, a pasty is a pastry pocket filled with something delicious. Sometimes they are filled with meat, sometimes potatoes and other vegetables, and sometimes it is mostly cheese. Think of them as Hot Pockets, except that these are actually food.

I made some last night and they were absolutely delicious. Seasonal produce in an appropriately wintery package. The filling is based on stuff I had on hand, so variation is encouraged. I find that you can throw just about anything in a pastry and it will be yummy. Just make sure the mixture is moist and the ingredients are mostly cooked. For example with this one, the sweet potatoes will cook some in the oven, but don’t expect them to cook all the way. They should be easily pierced with a fork before you put them in the pastry.

I kept the ingredients simple. There aren’t a lot of spices, because they aren’t really necessary. This will create something comforting and decicious, where you can really appreciate the flavors of the vegetables.

And let me tell you, the smell of bacon and sweet potatoes in a pan will make your house smell crazy good. 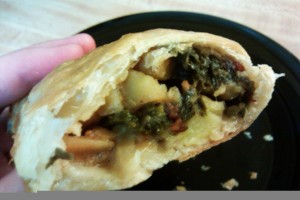 Directions
Preheat your oven to 400.

In a large skillet, saute the bacon, red pepper flakes, and onion until onion is soft and golden. Add garlic and cook 1-2 minutes more. Toss in sweet potatoes and kale. Saute for about 10 minutes, or until potatoes are soft. Add spashes of water as necessary to keep things moist and prevent sticking. (I probably used about 1/2 cup over the course of this cooking process.)

When the mixture has all softened together, toss in cheese and a large splash of water. Mix until the mixture is creamy, adding water as necessary. Take off heat and set aside to cool.

On a large cutting board or counter, toss down some flour and roll out the puff pastry a few inches in each direction. I wanted large pasties, so I cut each sheet out of the box into four large squares. You could cut out more if you want smaller pasties. Brush all around the edges of the square with the egg mixture, about an inch in on all sides. Then scoop about 3/4 cup of filling into the middle of the pastry square. Fold the top over and press down on the three edges that are overlapping. Use a fork to crimp the edges closed. Place this amazing food delivery package on a cookie sheet, either lined with parchment or foil, and then brush the whole top with the egg mixture. Do this until you run out of supplies. Should make 8 large pasties.

Then bake them in the oven for about 25 minutes. They are done when the tops are a beautiful golden brown. Take them out. Let them cool. And enjoy!

Pastry pockets are truly one of the perks of wintertime.