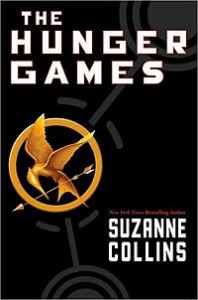 I love “The Hunger Games”.

I had no idea that this was true until last weekend. A number of people had mentioned the book to me, recommending it, but I took it as some kind of fad and kept putting it off. Last week I was on vacation and I snagged a copy for some light plane reading. I had no idea how engrossing it would be. How I would be unable to put it down. How it would stick in my dreams and how I would read it in two days flat.

It was the best read I’ve had in awhile.

I even put aside my current book, “A Dance of Dragons” to fly through this one. Which says a lot considering how obsessed I’ve been with the Game of Thrones series.

Generally speaking, I enjoy the genre of dytopian future books. “1984”, “Brave New World”, “The Windup Girl”, “Slapstick”, etc. “The Hunger Games” is an excellent example of the genre.

This year, Katniss Everdeen steps forward in place of her little sister to represent her district. The story follows her as she is forced to be a pawn in the Capitol’s game and what happens when she starts playing by her own rules.

I don’t want to give anything away, but the book was gripping. The humanity of Katniss is in constant conflict with the brutality of the games. Inner rebellion fights against fear of the state and the horrors they can do. The game is survival, but the question is if surviving is worth what it takes. How can you be a pawn in the game and still keep a piece of yourself?

Check out this book. It was a wonderful, fast paced read and I had to pick up the next book as soon as I put this one down. I can’t wait to see how it all ends.