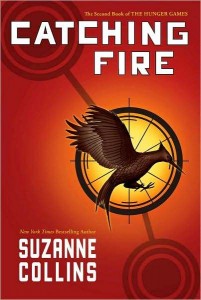 As I said in my previous post about “The Hunger Games”, as soon as I put it down, I had to grab the sequel. Three days later, I’m done with that one too.

“Catching Fire” was just as gripping as the first book. Katniss returns home a victor, but is still not safe. Her rebellious actions in the arena have made her a target of the capitol as well as a face for the underground rebellion. Can she keep up her loyal citizen act? Or will events too horrible to contemplate push her into the role of revolutionary?

This book focuses not only on the games, but the consequences of the games. We learn what is occurring in some of the districts and about a movement to try and stop the evil that is ruling the world. How will Katniss fit into the picture? Will she be able to save her family, keep her sanity, and be safe? Or maybe the only way to truly be safe is to fight and take down the oppresive government that put her life in jeopardy the first time.

On top of the gripping drama of the politics of the games and districts, Katniss must decide where her heart lies. Is it with the boy she grew up with who helped her family survive or the boy she nearly died trying to save in the games? I actually found this love struggle the most tedious part of the book, but it was still certainly more entertaining and had more depth than say the “Twilight” love triange. Really, Katniss has too much going on to be too worried about boys.

Revolution is at hand.