I went to the farmer’s market this weekend to find some goodies for the week. Despite knowing that we’re still in winter produce mode, I knew that they would at least have some beautiful spring flowers to pick up. Truthfully, I’m finally starting to get tired of the carrots, leeks, and greens that fill the market these days, but I strolled through the stalls and got some of each of those items anyways. I also picked up a bunch of radishes.

I’ve never been very interested in radishes, but I got a bunch one other time this winter and tossed them in a salad. They were pretty good, so I thought I’d give them another go. They were just so bright and beautifully colored. When I bought the bunch, they still had stems and leaves on. It was a huge fluffy bunch of greenery and when I got home I started to wonder why they kept them on the stems. I decided to look into it. If you couldn’t eat the stems, why sell them to me? I came across many stories about how you should eat radish leaves and found this recipe for roasted radishes and greens and decided to go for it. The result, was something pretty cool. 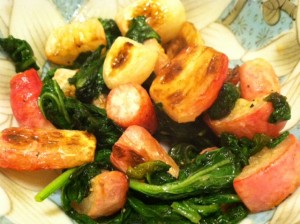 The recipe was easy and the result was satisfying. I only had one bunch, and since I was home alone that evening, it was just the right amount for me. In fact, I had a very pink dinner. To go with my beautiful pink radishes, I made some beet and goat cheese ravioli that I also picked up at the farmer’s market, tossed with sage brown butter. 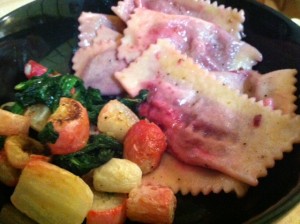 I was very satisfied with my little dinner. Though, it certainly seems like pretty girly food. I mean, look at that plate, very pink. My boyfriend wasn’t around for dinner that night. If he had been, I’m sure he would have asked where his dinner was. But for a girly night at home, it was a delicious pink dream.

I’ll certainly make this radish recipe again. It was a nice side dish. Tart, lemony, and simple. If you don’t know what to do with radishes yourself, give this a try.

(Since I only had one bunch of radishes, I adjusted quantities and cook times. Recipe below is the original.)

2. In a large ovenproof skillet, heat the oil until shimmering. Add the radishes, season with salt and pepper and cook over high heat, stirring occasionally, until lightly browned in spots, about 2 minutes.

They looked so pretty in the pan!

Transfer the skillet to the oven and roast the radishes for 15 minutes, until crisp-tender.

3. Return the skillet to the burner and stir in the butter to coat the radishes. Add the radish greens and cook over moderate heat until they are wilted, about 2 minutes. Add the lemon juice and season with salt. Serve the radishes right away. 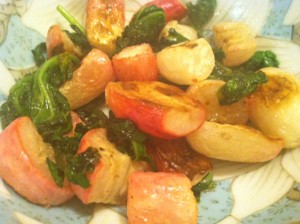