Once I had finished “Emergency” for book club, I had a few weeks to kill before it was time to start reading our new book. I grabbed a copy of Tom Robbins’s “Even Cowgirls Get the Blues”. 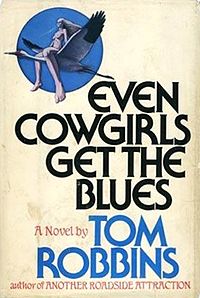 A few years back, for book club, we read “Jitterbug Perfume”.  I loved it. Everyone loved it. It was such a fun book and I decided I was a fan of his work. So, the next time we were selecting books, we decided to read another of Tom Robbins’s, “Skinny Legs and All“. Unfortunately, we didn’t like it as much. It was ok, but not nearly as much fun as the first. It brought to light the question, do I love his work or just that one book? Was “Jitterbug Perfume” a fluke?

I had heard good things about “Even Cowgirls Get the Blues”, and figured it would be a nice place to stop and maybe figure out the answer to that question. Unfortunately, I didn’t love it. The thing that I think is so cool about his writing, is the way he describes things. He has a great sense of words. For example:

“A sigh, not a snort, was what Dr. Goldman issued next; a soft sigh like a trade wind blowing its nose against the sail of a toy boat.”

But the problem is that in this particular book, I thought he spent too much time philosophizing, and not enough time on the story. It had all the elements of a really great story, but it was broken up with long winded wanderings on philosophy and time and speaking directly to the reader about storytelling that it was hard to get to the meat of the story. Though I did enjoy this break in the story about writing.

” “But…” said Sissy. Sissy said “but” while sitting on her butt on a butte. The poetic possibilities of the English language are endless.”

Generally speaking, the story follows Sissy Hanshaw. She was born special. She was born with enormous thumbs. Unable and uninterested in fitting in, when she is a teenager she hitchhikes away from home and never turns back. Sissy is the best hitchhiker in the world. Best in history. She doesn’t hitch to go anywhere in particular, but just to stretch her thumbs and soak in the magic of movement. It is a solitary life, but one she is happy with until she is introduced to Julian. A very normal man that makes her feel wanted and safe. She stops moving and tries to fit in, with poor results.

When given an opportunity for some work by her benefactor, who is quite a character, she takes it. The job is on the Rubber Rose Ranch, where she meets Bonanza Jellybean for the first time, and the rest of the cowgirls. She finds her fate intertwined with theirs and with the mysterious man that lives on the ridge overlooking the ranch, the Chink (who is actually Japanese and is considered an Indian shaman. Go figure.). The story wraps her up with cowgirls, Indians, a philosopher psychiatrist, the meaning of time, and an endangered group of whooping cranes.

The story is about love, time, the end of the world, and the point of civilization. Will Sissy succeed in fitting in with society? Will she decide that she is better off alone on the road? Or will she find her own place?

Like I said, it had all the makings of a really enjoyable book. Vivid characters. Crazy cowgirls. Giant thumbs. But Robbins got too involved with the theories and didn’t focus enough on the people for me. It seems clear that it is an early novel, and one where he played with experimentation in style and perspective. Unfortunately, it just didn’t come together for me.