I consider myself very lucky to work for a very cool company. This year, was the first time that PopCap Games decided to be a sponsor at the Seattle Pride Parade. I was one of the many that worked to make this dream a reality. I was given the awesome task of creating a Drag Queen Zombie to be our mascot for our float in the parade. (And by given, I mean I took that job because I thought it would be awesome and that is one of the perks of leading the planning committee.)

When the time came to begin, I was given one of the zombie heads that we use for our promotional videos and events.

When we decided to make a drag queen zombie for the parade, one of our talented artists here designed an awesome sticker to hand out to the crowds. I was able to use it as inspiration. 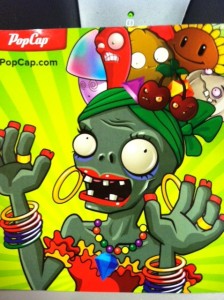 When I got the zombie home, we spent some time bonding and I decided that the first place to start, was obviously make up. A girl needs her face on before worrying about the rest. So I busted out the paints and glitter and got her on the way to beautiful. Isn’t she pretty? 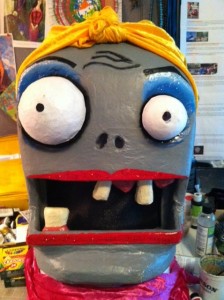 We had obviously decided to go with a Carmen Miranda theme for the zombie. One of my team members in the planning group found a bunch of fake fruit at a yard sale and hooked me up. I spent another afternoon glittering it dozens of pieces of fruit. We couldn’t have just plain fruit on the headdress! 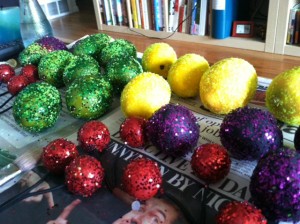 Once I had the fruit and a bunch of sparkly supplies from a local craft store, I got to work. First, I built a foam platform to use as the foundation for the headdress, and to give the zombie extra height. I attached it to the zombie head and wrapped it all up in some glamorous fabric. Then I was able to attach everything to the foam, mostly via hot glue and wires. At this point in the process, I thought she looked pretty fabulous, but not quite perfect. I kept her home for about a week, trying to figure out the finishing touches. 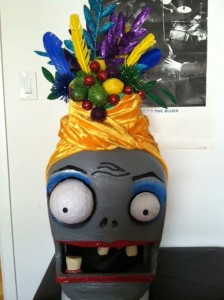 Finally I came up with a game plan. She needed earrings. She needed feather eyelashes. And most importantly, the headdress needed to be bigger. Bigger is better when it comes to drag queen zombies.

And here is the final vision of lovely.

One of my partners in crime assembled the outfit to accompany the head, and here you can see her in full costume arriving at the float. (We had an excellent volunteer to portray the zombie. He was a real trooper.) 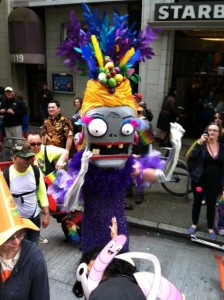 “Oh isn’t this all so exciting!”, she exclaims.

And here she is during the parade in full regalia. 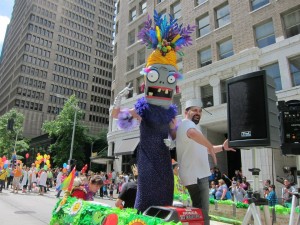 When you put a 4 foot tall head on a 6 foot tall man, it makes for a giant of a drag queen zombie. The crowd was thrilled. I was thrilled. All in all, it was an awesome event and I love that I was able to use my crafty skills to create something this fun.

Not your every day craft project. 🙂