Kushiel’s Chosen is the second book in the Kushiel’s Legacy trilogy by Jacqueline Carey. It was a rip roaring good time. I think it is the most straight up adventure story of the series and was a lot of fun to read.

At the end of the first book, Melisande is on the loose after the battle of Troys-Le-Mont. That means that there must be a traitor in their midst. Someone helped her to escape. Someone close to the queen. Someone they trust. 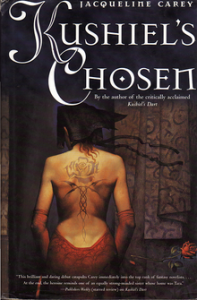 Phedre decides to ferret out the traitor. She goes on a wild and high flying adventure to find Melisande, but it is an adventure that no one could guess the end to. As the prophet tells her, “You will find her in the last place you look.” And boy is that the truth.

Phedre explores a number of new cities and countries, is ransomed by a dashing and famous pirate, is held captive in the most infamous prison in this world, speaks as the voice of a God, and has a million adventures in between. This was a fun one in the series. An excellent follow up to the first book, and as I felt with the first book, it ended solidly. I was drawn to the third book, but not because I was left hanging, but simply because I wanted more.