I recently finished “The Great Santini” by Pat Conroy. This is the fourth book of Conroy’s that I have read. Reading Pat Conroy is an immersive experience. He makes you want to move to the South. He makes you smell the flowers in bloom, taste the salt in the air and embrace the feel of an oyster sliding down your throat that you just caught and popped open from the salt marsh. Pat Conroy is a man in love with the South and he makes you understand that and feel it too. 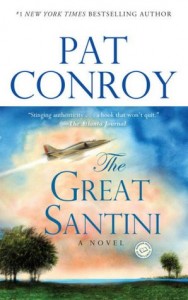 Conroy published this book in 1976. It is based on his experience growing up in a military family. The patriarch of the family in the book is Bull Meecham, who is based on Conroy’s own father. Bull is a fighter pilot who runs his family with as tight a fist as he runs his flight squad. The story alternates mostly between Bull and his son Ben. Their relationship is hard. Ben alternates between hating and loving his father. The story explores that relationship and how Bull Meecham, who calls himself “The Great Santini” affects all those around him with his powerful personality. It is a story about the man that Bull Meecham is and the man that Ben is becoming and how one can affect the other.

As with all of Conroy’s stories, it is both beautiful and dark, lovely and sad. It is not my favorite book of his that I have read. That is not to say that I didn’t enjoy it, because I did, but the thing that I love about his other books is how everything ties together. Each interaction that each character has, each side story, reflects a deeper meaning and revelation to the story. With this book, I thought it lacked some of the nuance of his other works. Some things happened and they didn’t seem in the end to have much to do with the final point, which I found disappointing.

Beach Music was an amazing book of his that I highly recommend. The Prince of Tides is another. And if you want a cookbook that is also a fun and wonderful story book, try out The Pat Conroy Cookbook.

“The Great Santini” is significantly shorter than “Beach Music” or “The Prince of Tides” and it is a nice story. It could be a good intro to his writing, but it is missing the depth that comes out in the other books for me. If you want a short intro, check out the cookbook. But whatever one you choose to start with, just start. Pat Conroy might just change your world.