This month for book club we read “Drift”, by Rachel Maddow. 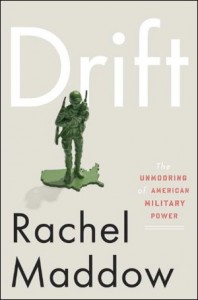 I found the book fascinating. And terrifying.

Drift focuses on war in America over the last 50 years. In the past, war was something that the whole country was involved in. It was something that had to be declared by Congress and something that everyone would have to sacrifice for in some way. The book shows how America has drifted away from that. It is about how the Executive branch has slowly stolen the power to make war from Congress. It shows how the American people have been slowly distanced from our troops and from the realities of war. This book shows how we have become a huge, unstoppable, war making machine instead of a nation that is essentially a peace time nation.

I was unfamiliar with a lot of the history explained in the book. After reading about Reagan’s Iran-Contra scandal, it is really hard for me to understand how the modern day Republican party can hold him up to be some kind of icon of the party. It is also hard for me to see Dick Cheney as anything other than a real life version of Chancellor Palpatine from the Star Wars saga. (You like that geek reference?) Over the last 30 years, it seems that he has been slowly and cunningly collecting power for the President and urging him to use it unilaterally.

The book also talks about how the military uses contractors and the lawlessness that is involved there. The book talks about how the US military budget is larger than that of the entire rest of the world combined. It asks us what is the point of keeping this huge machine running and how we are using it just because we happen to have it.

The book raises a lot of disturbing questions and shines a lot of insight on politics of the last few decades. It was an interesting read and the discussion at the Book Club meeting was great, despite not everyone having finished it. But, after the discussion, many of the people that didn’t finish it said that they were planning to now. I thought the way that Maddow wrote was entertaining and easy to read. Her humor and sarcasm shone through to make what could be a really dry piece something that was engrossing.

I think everyone should read this book. I feel more educated about the state of our military and more informed and interested in the current political race because of this information. I actually have educated opinions now about military spending and a newfound interest in the politicians’ views on these issues. Pick it up. I feel inspired to read more non fiction this year after the success so far of this one and “Emergency”.