After a weekend of eating decadently, lately, my thoughts turn to farro. 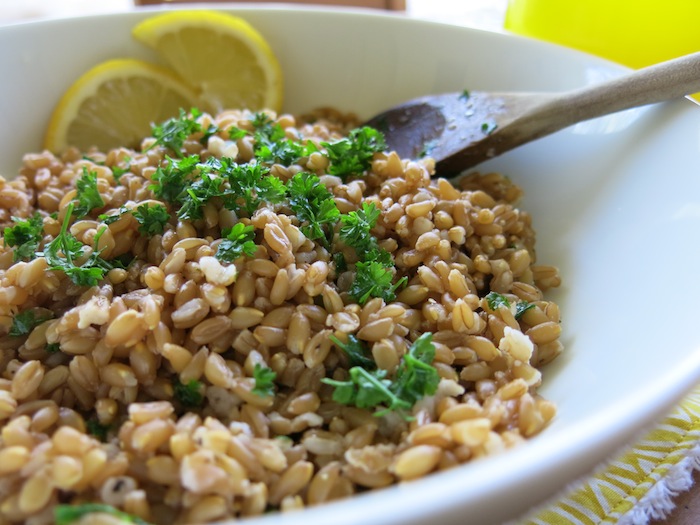 Farro. What is farro anyways? Farro is a whole wheat grain, usually emmer wheat. It is boiled until plump, but still chewy, and I find it delicious. 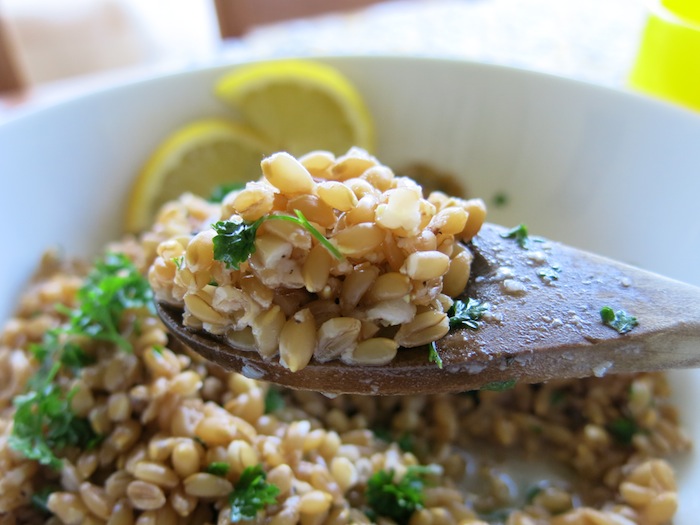 I bought a package years ago for a summer bbq. I had a vegetarian friend coming and wanted to make something nice for him. I found some recipe for a black bean and farro burger and if I recall, it was quite nice. In fact, I used leftovers of this salad to build out some veggie burgers this year for Memorial Day.

As it happens when you sometimes buy an unfamiliar ingredient for a specific recipe, the half empty bag sat on the shelf, forgotten for years. But, after the holidays this year, I was searching for something healthy and light to eat and I came across it in my pantry. The package I had previously purchased had expired, but I became so enchanted with the idea of a big bowl of grains, that I went to the store and got more. I have now finished my second package since that one. 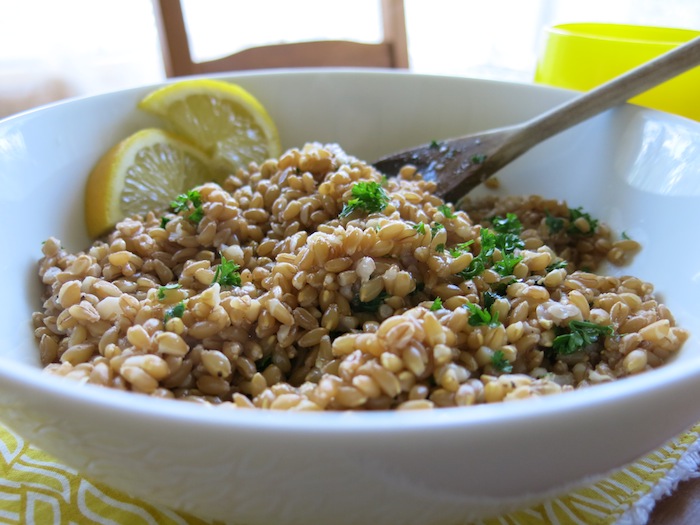 The first time that I served it to my boyfriend, I was talking about how healthy it was and how it was a whole grain. He had a bite and said, “It is kinda like weird rice.” Fine by me. If it helps, think of it as strange, chewy brown rice. It tastes a little nutty and is very satisfying. I’ve had it hot and had it cold straight out of the fridge and it is hard to say which is better. 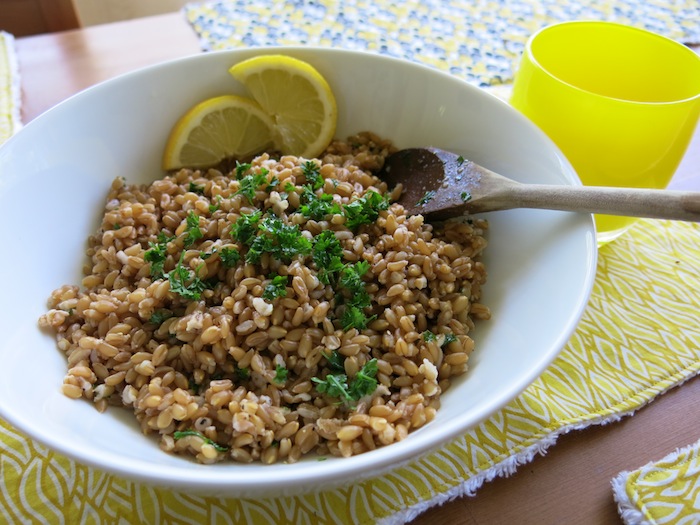 This is a great side dish. Serve roasted chicken over it, toss it in with an arugula salad, or just eat it as is for a simple and filling lunch or snack. 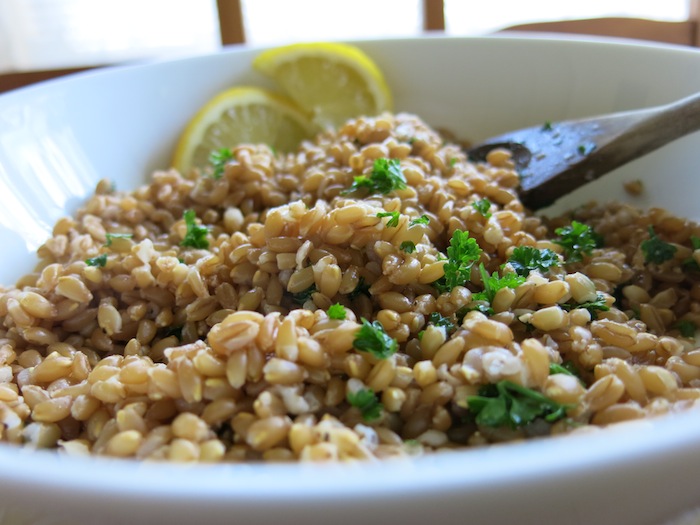 Boil one cup farro in five cups water for five minutes, stirring frequently. Then cover and simmer for 50-60 minutes, or until farro is tender and starting to burst. (But, check directions on the package before using this method.)

Drain, transfer to a serving bowl, drizzle with lemon juice, olive oil and vinegar. Cover and let it sit for 15 minutes. This gives it time to soak up the flavors. 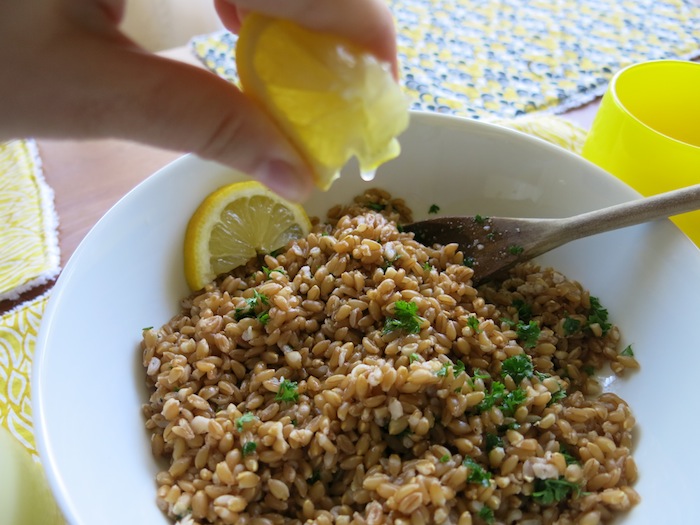 Add the parsley and salt and pepper to taste. You will want a generous amount of the black pepper. Toss gently and serve at warm, cold, or room temperature. 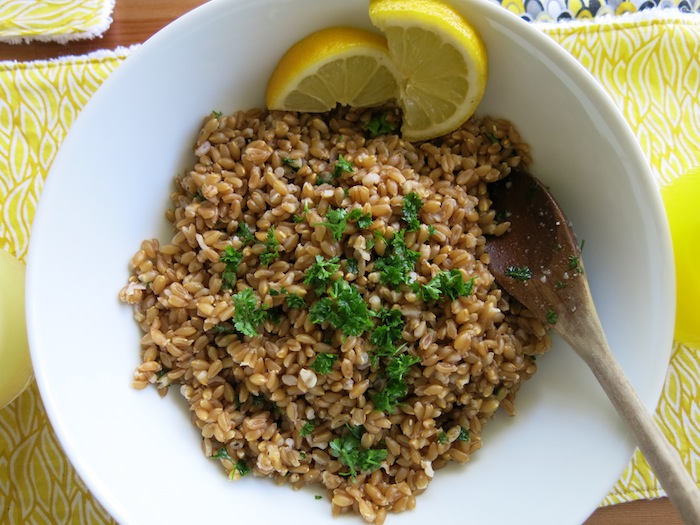 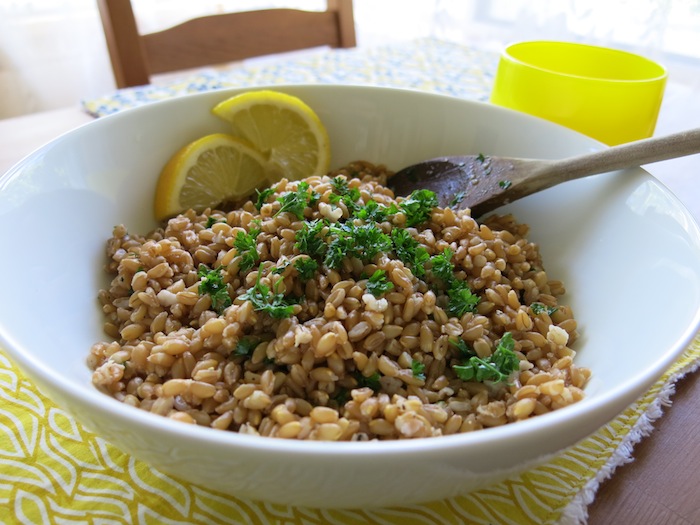