A few days ago, I finished reading Philip K. Dick’s amazing novel, Do Androids Dream of Electric Sheep?. I thought that it was just amazing. The story is well told, the characters were intriguing and the ethical dilemmas seem like ones that we ourselves will have to confront in the next few decades. 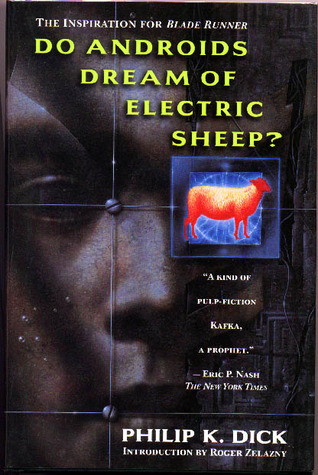 The story is of Rick Deckard. He is a bounty hunter on Earth, tasked with finding and “retiring” renegade androids. In this future, the Earth is a wasteland covered in toxic dust left over from a global war. Most humans have emigrated to other planets with the promise of a future free from the toxic dust and the gift of an android. The androids are given as companions to the humans on the other worlds. The design of the androids is very advanced. So advanced, that it is nearly impossible to tell the latest models apart from humans. Some of the androids however, do not want to be possessions. They kill their masters and flee back to Earth in an attempt to live a free “life”. Rick is tasked with hunting down these androids.

At the top of the novel, he is excited by the opportunity to hunt down a new collection of androids who are thought to have landed on Earth, but after meeting Rachel Rosen, a new generation of android, he begins to think of things differently. He begins to struggle with seeing the androids as just “things” instead of creatures that may be due a life of their own. It is interesting to watch him struggle with the morality of killing these androids as the story goes on.

The way that Rick is able to tell humans apart from androids is by administering a test that gauges empathy. Androids have a hard time understanding empathy, making it a distinctly human emotion. Empathy is a continuous theme in the book. Most of the humans in the book are part of a religion or philosophy called Mercerism. Mercer is a person that is constantly struggling up a hill. When he reaches the top, he falls off a cliff and is reborn to do the walk all over again. Humans can join Mercer on his walk via an empathy box. When linked to the box, the humans can feel all the other humans participating. It spawns a group mentality and supposedly creates greater empathy for other humans.

This emphasis on empathy also ties in with the appreciation of all lifeforms. Everyone that can afford one has an animal on Earth. Owning a live animal is a sign of wealth and status. To hurt a living thing would seem preposterous to the people on Earth. This empathy towards all living things creates an emotional tension for Rick, as he begins to feel that perhaps the androids are not just things, but may have souls of their own.

Honestly, I did not see myself enjoying this book as much as I did. I have never seen Blade Runner all the way through, and so I didn’t really know what to expect at all going into this book. I just knew that it was a science fiction classic. But there was far more depth to this book and to the characters than I expected. It was thoughtful, interesting, and exciting. As soon as I put it down, I wanted to pick it up again and start all over.

On a final note, I love seeing the future through the eyes of science fiction writers. I think that it is amazing how they can predict the technology of the future and influence the way that science progresses in the real world. Throughout the book, the characters communicate with each other via video phones. Published in 1968,  only a few years after the push button phone was released, it is amazing to me that he took such leaps in imagination. Granted, we aren’t quite to hovercars yet (unfortunately), but Dick’s vision of the future does not seem all that absurd. It is easy to envision the wasteland of Earth that he creates. Let’s just hope that he isn’t right about that part.