I love pocket foods! In fact, I’m going to start a new category on the blog for searching for pocket foods.

Anyways, samosas are one of my favorite pocket foods. I made this delicious lamb filling, which I shared with you on Monday. The lamb is great on its own with rice, but it is even better in a fried pocket. But what isn’t really? 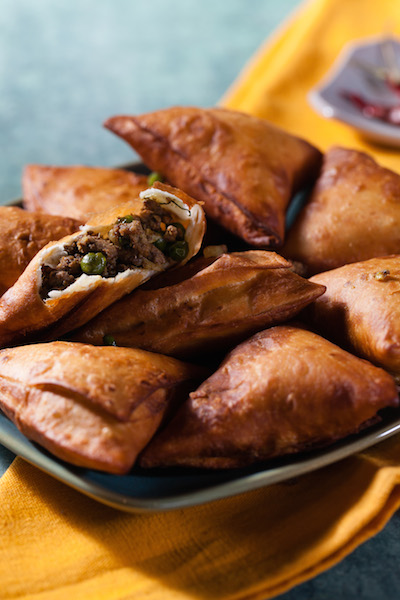 When I read the recipe saying that you could use regular Mexican flour tortillas for the wrappers, I didn’t believe it at first.  I thought that the tortillas wouldn’t be flexible enough and I didn’t believe that a simple flour and water mixture would hold them together. Luckily, I was proven wrong! I had no idea that something that I kept in my fridge all the time could be my new medium for pocket foods! But, the tortillas fried up beautifully, tasted delicious, were easy to assemble, and held together perfectly. 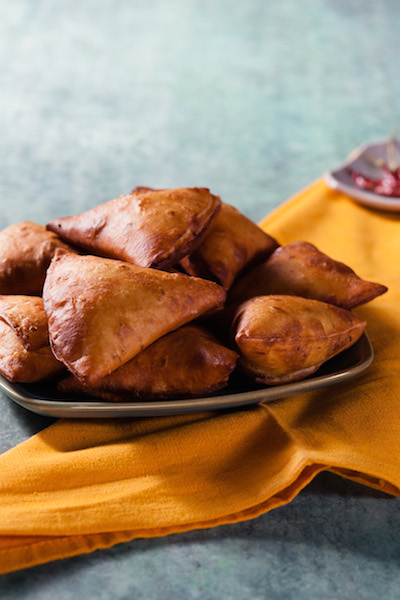 I ate these with a store bought mango chutney, but they would also be good with a simple raita, like the one I made last time that I attempted samosas. That recipe was good, but this one is better. And the tortillas for the crust is way better than the pie crust. Who knew?

Now you can make this delicious Indian treat at home. Have fun!

Mix flour and water into a paste.

Form cone by folding 1 side of the half circle tortilla to the middle. Dip the tip of your finger in the binding paste and wipe it on the folded edge and along the other cut edge. Fold over the double side to form a triangle and tightly press to form a seal.

Open the triangle to form a cone. Fill with Spiced Indian Lamb mixture. Dip your finger in the paste and run along the inside edges of the cone. Pinch to seal. Assemble all the samosas.

Heat oil in a medium pot over medium high heat. Test temperature by dropping a small piece of tortilla in the oil. If it sizzles, it is ready. Fry samosas in batches until golden brown. Remove to paper towel lined plates to drain.