I recently finished a novel by famed Swedish writer, John Ajvide Lindqvist. The book was Harbor. If you haven’t heard of Lindqvist, you have probably heard of his bestselling book, Let the Right One In. It was made into a movie in Sweden and was so popular, an Americanized version was released later. The cover of Harbor has a quote from the Washington Post saying that it, “establishes Lindqvist as Sweden’s Stephen King.” I find that quite amusing and applicable. Although, having never actually read any of Stephen King’s books, I can’t really make a fair comparison, but I’ve seen many of the movies based on his books at least.

I don’t remember why or where I bought this book in the first place, but it had been sitting in my “to read” pile for a very long time. I grabbed it randomly one day on the way to the gym, to entertain myself while I ride on a bike that goes nowhere. I’m pretty sure that a woman on the bus recommended this author to me randomly one day, and it appears that I got the book from a second hand shop, from the stickers on the cover. I don’t remember. It’s a mystery! Perhaps it just morphed its way into my library. Appearing out of the mist one day. It would be appropriate considering the book’s content, though I don’t know why it would have sought me out in particular.

An odd thing to ponder.

Harbor was written in 2008. The story takes place on the island of Domaro, a small island and community centered around fishing. One day, Anders and Cecilia take their 6 year old daughter Maya out for an adventure to a lighthouse on a neighboring island. She goes to explore in the snow and disappears. No tracks, no other people, no little girl, no explanation. As Anders searches for reason, he begins to sink into a world of superstition, ghosts, and monsters. Domaro is not what it seems to be and the people hold a secret that has been passed down for hundreds of years, a knowledge of something out in the water. Something vast. Something dark. Something that must be kept at bay. 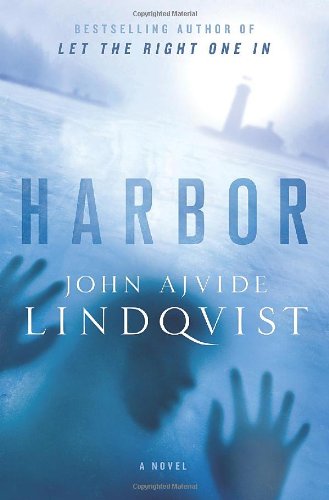 It was a very well written, engaging story, full of well defined characters dealing with extraordinary circumstances. The buildup of the story was well crafted. I enjoyed the characters and the flow of their stories. The end was not the most satisfying end, but I imagine it is hard to craft a horror/thriller type story with a satisfying end. In fact, in a writer’s aside towards the end of the book it says, “When the monster shows its ugly mug at the end, it’s always a disappointment. It can never match up to our expectations.” And I think that’s true. But, it doesn’t negate the fact that the ride to the end was a lot of fun.

This isn’t a genre that I ever read, but I quite enjoyed the ride. I think I’m turning into more and more of a scaredy cat as I get older, or maybe I just don’t revel in the adrenaline of fear as much as I did when I was younger. I used to love scary movies of all kinds, but not as much anymore. But, I do think that I’m inspired to pick up a Stephen King book sometime soon and see if he’s America’s John Lindqvist.