The bookclub just wrapped up our second book on the list, “Travels with Myself and Another”, a memoir by Martha Gellhorn.

Gellhorn was a sassy broad. I could pretty much leave it at that, but will share a bit more. 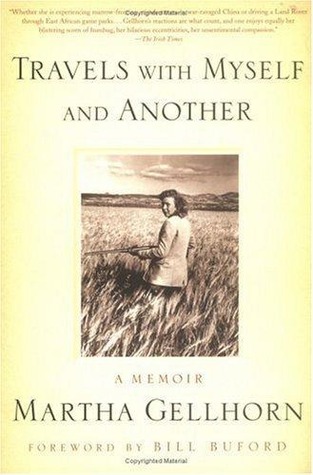 Martha Gellhorn was the first female war correspondent. She traveled to China, the Bahamas, and South America during World War 2. She was there with the Allied troops when they stormed the beaches of Normandy, the only woman with the troops. She covered every major world conflict during her 60 year journalism career.

Martha Gellhorn had a strange idea of fun.

Gellhorn was also the third wife of Hemingway, a fact that irked her in later life, as it was always listed as if it was one of her great accomplishments. They met in 1936 and traveled to Spain together to cover the Spanish Civil War. They were married 1940-45. The first story in the book is about her and Hemingway traveling to China during WW2. She refers to him throughout as UC, or, The Unwilling Companion.

In addition to being a journalist at a time where it was not considered an appropriate field for a woman, she was a travel writer, traveling all over the world, often unaccompanied, another shocker for her time.

“Travels with Myself and Another” is a collection of travel stories. But, amusingly, it is a collection of nightmare travel stories. In the introduction, she talks about when she returns from a journey, people never want to talk to her about the good memories of the trip, they want to hear the terrible stories. The stories of stolen baggage, runaway transportation, terrible hotels. There is something about people that just make them love the horror stories. And so, that is what this book is. It is her worst travels, and boy are they epic.

Basically, traveling in the 40s sounded terrible. She tells tales of flying in unpressurized airplanes with extreme turbulence that is making everyone ill. When she tells the pilot she is feeling lightheaded, he said it is normal because there isn’t enough oxygen. That is not what you want to hear from the person flying your plane.

Hotels in remote areas sounded dirty, with limited plumbing and lots of bugs. And being one for cleanliness, Gellhorn complains a lot. In fact, for such a bad ass lady, she really seems to dislike much of the travel experience. I suppose that it speaks to her character that she does it anyways.

Gellhorn writes with a very simple, straightforward style, with beautifully visual language occasionally tossed in. She is very much a tell it like it is gal. But, this was also part of my problem with the book. She tells it like she sees it. And one could argue that for a writer of her time, she was very open minded and liberal, however, from the point of view of this day and age, some of her writing feels a bit racist. There were times when she was describing the people in Africa, or in South America that made me uncomfortable. For example, at one point she talks about how for some reason naked black men don’t look as naked to her as a naked white man would. That they are more natural naked.

And I’m pretty sure that everyone in Kenya doesn’t smell bad. I mean, come on Martha.

It is hard for me to know how to feel about the book as a whole. There were some funny stories for sure. There were unbelievable scenarios that Gellhorn found herself in. She was obviously a intriguing person and I’m glad that I know a little bit about this character now. But some of her perspectives are outdated and bigoted. I suppose the book should be looked at through the lens of a time capsule. The book gives you a view into what it was like to travel the world before world travel was something that people did. When places that are now major tourist destinations were empty of visitors. When people didn’t understand a woman traveling alone. She paved the way for women in journalism and in travel.

She was a sassy broad.