I saw this recipe on Food and Wine about a week ago and figured it would be an excellent thing to make on my long weekend. However, by the time I got to it, one of my two large eggplants had gone soft, so I had to half the recipe. I didn’t follow this exactly on the measurement front and I’m sure mine was way cheesier than it was supposed to be, but I loved it! It was perfectly comforting and it didn’t even have any meat! 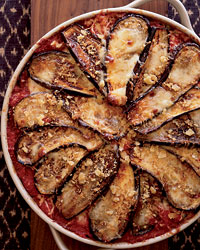 (This picture is from food and wine. Mine wasn’t nearly this elegant, but not bad.)

My boyfriend put it well when he said as we were eating it, when I look at eggplant, it just looks like something I’m not supposed to be eating. I totally get that. It is generally soft and rather grey when people cook it. And, in this baked Parmesan dish, it was still those things. But, despite it’s weird appearance, I loved the way it tasted. It seems almost meaty in its richness and texture. And I think the layering of the eggplant in this dish make it seem almost like a lasagna.

I have finally found a reason to like eggplant!

It was also much easier than I expected it to be. This is a pretty easy weeknight dinner. Sure, it takes a little time to fry all that eggplant, but it was over with pretty quickly. Just start it early. Since mine was a half recipe, it only took 30 min in the oven, but you want to keep that in mind when you are planning out time. I also just used panko instead of real bread crumbs because it is easy and was still satisfyingly crunchy. Also, I don’t see the point of pureeing the sauce. I skipped that step.

However, as an added bonus, the website says you can make it a day ahead and refrigerate it. But, it says to bring to room temperature before you toss it in the oven.