Last weekend a friend of mine asked me to come over to help her get ready for a SteamPunk ball. What is SteamPunk did you say? Well, this is what wiki tells me.

Steampunk is a sub-genre of science fiction, alternate history, and speculative fiction that came into prominence during the 1980s and early 1990s. Specifically, steampunk involves an era or world where steam power is still widely used—usually the 19th century and often Victorian era Britain—that incorporates prominent elements of either science fiction or fantasy. Works of steampunk often feature anachronistic technology or futuristic innovations as Victorians may have envisioned them; in other words, based on a Victorian perspective on fashion, culture, architectural style, art, etc. This technology may include such fictional machines as those found in the works of H. G. Wells and Jules Verne or real technologies like the computer but developed earlier in an alternate history.

Steampunk is a crazy world of Victorians with wind up laser guns, corsets and gloves, bizarre eyeglasses, and robot parts. Now, I haven’t been to any of these steampunk events, but I think this is the year for me to do it.

But I digress. I went to help my friend work on her costume for this event. She actually made her own bustle skirt, which totally rocks. She found the info on this site. http://www.cutoutandkeep.net/projects/burlesque_bustle_skirt I helped her put together her costume by making her a hat to go with it and styling the wig. Check it out! 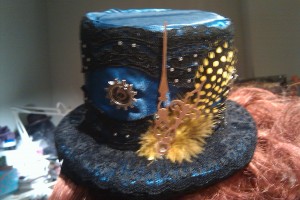 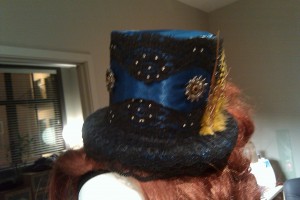 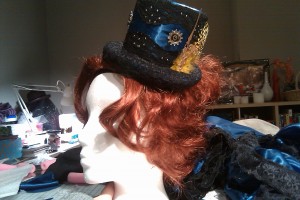 I made this thing with cardboard, hot glue, packing material, and leftover satin and ribbon. I think it turned out really well. I only wish I had taken pictures along the way! However, since I will surely be making my own costume in the near future, I’ll document the process then.

And this is the final look. 🙂 Steampunk. What an amazing hobby.