Now, I don’t know what makes these spring rolls instead of egg rolls, but that is what the recipe said.

My boyfriend and I have been making these for years now. The original recipe and the cookbook have disappeared two or three moves ago, but we have figured out the general gist and now make these a few times a year. We can’t make them too often though, because we end up just living on them all week until they disappear. 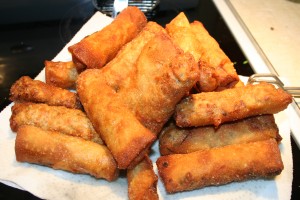 They are sooo good! Look at that golden crispy goodness and tell me you don’t want to just eat the whole plate.

There isn’t a lot to these spring rolls. It is pretty much just pork and seasonings. Magical, flavor exploding, seasonings. And, seeing as I don’t have a written recipe for this, I’m going to walk you through it the way I do these. So, read all the way through to get the ingredient list before you start. 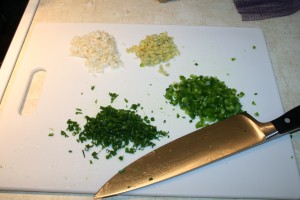 Heat some oil in a skillet and toss in 2 pounds of ground pork and all of the stuff you just chopped. Also, cut in one dried red chili pepper. You can try to chop these, but I find it easiest to just grab the kitchen scissors and just cut it up over the pan. 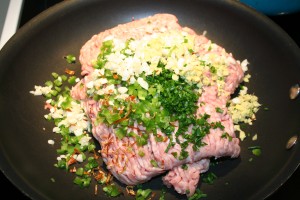 Cook until pork is all done and golden. 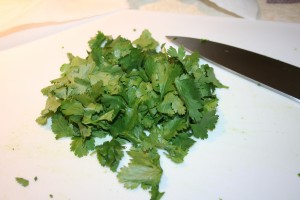 While that is happening, chop up a big bunch of cilantro. When it is chopped, should give you a little more than 1/4 cup of loosely packed cilantro.

Once the meat is browned, turn off the heat and toss in the cilantro. This is also the time to add soy sauce. It is hard for me to say how much should go in. I just shake and shake it in until I get the right golden brown color. But, if I had to put a measurement on it, I’d add 1-2 Tablespoons. You can’t have too much really. Start with one and taste it to see if you want more.

Start with one square of egg roll wrapper. You should be able to find these in your grocery store. 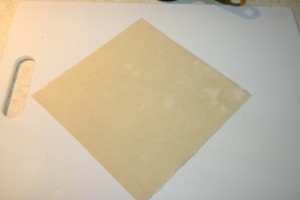 Add about 2 Tablespoons of meat (or maybe a little more or less, depending on how big you want your egg rolls. You’ll figure it out as you go.) 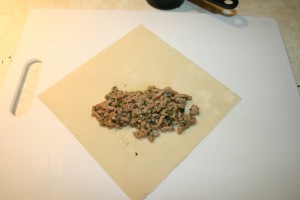 Fold up from the bottom over the meat and tuck the wrapper in a little at the top. Not too tight! If you tuck too tight, you might rip the wrapper. 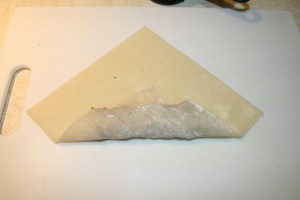 Then you fold the two sides over. 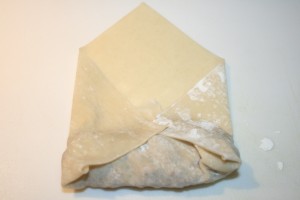 And then roll it up to the top! You should have a small cup of water nearby. Once you have rolled the spring roll, seal the edges with water. This will hold it all together. 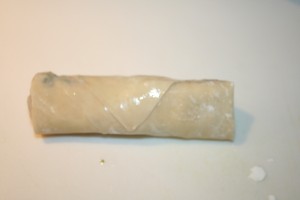 I’m also going to give you an alternate wrapping plan.

I have a good friend who is from the Philippines. Her family makes an egg roll called Lumpia. It is also pork based and super, super yummy. They are small and cute little egg rolls and the last time she made them, I got to see how she rolled them. (Maybe someday she’ll give me the recipe.)

This is a great method for more bite sized rolls. (In case you are more generous than I am and want to serve them to other people. These are so good I have a hard time sharing!) Lately I’ve been making some of both sizes in my batches for variety.

Cut the wrappers in half on the diagonal. 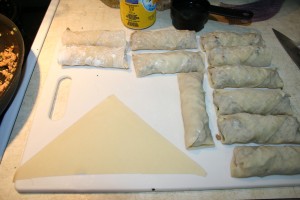 Add about half of the meat you would in a full sized roll. 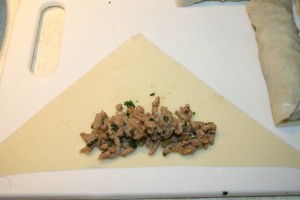 And then just fold and roll like the others, only you skip the first step where you fold over the bottom. Just fold the sides in and roll it up! 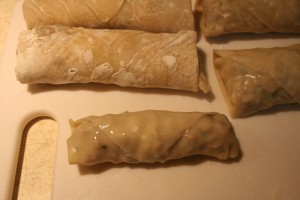 And you get a much cuter, smaller spring roll.

Once you have all your rolls rolled up, get a small pot and fill it about halfway with vegetable oil. Get it nice and hot before you start frying. Medium high should do it on your stove top. 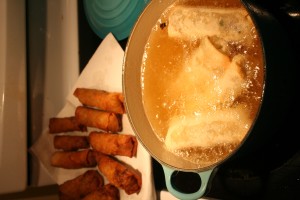 Fry a few at a time. Don’t put too many in at once or they’ll stick together and will lower the oil temp to where they don’t fry as well.

Let them get nice and crispy and then drain on a paper towel lined plate.

Serve with sweet chili sauce. I like to buy 2-3 sauces at a time so that I can figure out what my favorite is. I end up using all of the sauces, but that way I know which one to buy the next time.

Making your own spring rolls can seem really intimidating. But I’m telling you, it is really pretty easy! And you can adapt the ingredients to your tastes. Give it a try sometime. I promise it will be worth it.