The last few years, I’ve gone all out for Halloween. I’ve made a dragon costume, gone as the Queen of Hearts, and even a charming Scarlett O’Hara. This year was not any different. I decided to be Medusa this year. But more than that, I also kinda wanted to be a drag queen. So, I took inspiration from those crazy bitches on Ru Paul’s Drag Race and made a Medusa costume fit for a queen.

I had to begin by asking myself how to go about making a huge snake hat to wear on my head. First of all, I wanted something lightweight. I didn’t want some heavy, sandfilled snakes on my head. And I wanted them solid. I didn’t want to have to reshape them everytime I bumped into something, (which I did all night, as I seemed to have a hard time knowing how much space my head was taking up.) Oh, and I had a bunch of newspapers in the house, so I wanted to paper mache.

I came up with a plan. Unfortunately, I didn’t take pictures of my early steps. Honestly, for some reason I seemed to have a hard time getting psyched up about my costume craft this year. I think it is a resentment towards the cold weather that makes me not want to embrace the fall fun stuff. But, I pulled myself together and made it rock in the end and I took some pictures of the final steps.

First step, find a buckrum hat form. I made one that fit snugly on my head. I suppose it wouldn’t need to be buckrum, mearly something solid in structure with holes.

Then I braided together pipe cleaners to make them thicker and more sturdy. I pushed one unbraided end into the buckrum and twisted on the underside so that the pipe cleaners stood straight out from the top of the hat and were attached on the inside. I did that all over the hat until I thought I had enought snakes. I went for a snake mohawk look, just making the top stand out and wrapping them around the sides. This did two things. It made for a great look and also greatly reduced the time and effort it would have taken to do the whole head.

The next step was to thicken up my snakes. I wanted them to have some girth, but not weight. I came up with the perfect solution. Bubble wrap. So, I wrapped a thin sheet of bubble wrap around each pipe cleaner and then used painters tape to hold in place. At this point, things look pretty snakey. This is the time to bend the snakes around and figure out how you want them to look. I found they looked great and were sturdier when they were leaning on and twined around each other.

Once all the bubble wrap snakes are formed, it is time to paper mache!

In case you haven’t ever done paper mache, it is really simple. Basically, you get some plain white glue and mix it with water until it is thin, but still very sticky. Maybe a 1-1 solution. Then take strips of newspaper and dip them in the glue, wiping off excess, and lay them on the bubble wrap. Your hands will be covered with glue and there is nothing to do about that. Smooth the newspaper down so that there aren’t bumps. I did about two layers on my hat, allowing for drying time in between. I wanted to make sure it was sturdy. 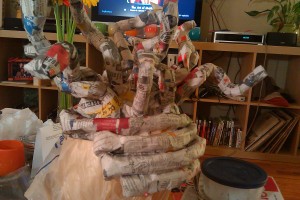 Here is the hat covered in the paper mache.

Once I was happy with the smoothness and strength from the paper mache, I painted it black.

Once that was done, I used the paint to attach glitter. I would paint sections that I wanted to glitter and then sprinkle it over. That prevented inconsistancies in the color that glue might have created.

In case you are now wondering about the awesome “Black Swan” type eyes, I watched the following tutorial, which gave me the inspiration to make my scaley eyes. I used black liquid liner, copper liner, and some gold shadow in select spots. http://www.youtube.com/watch?v=SZwaKDaSgqY

To finish my costume, I made a toga style dress out of some curtains I had around and made a head wrap to hide my hair under the hat. 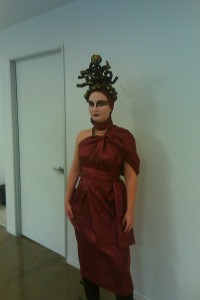 I am proud to say that I won my company’s costume contest in the Scariest Costume category, which suits me just fine. I wanted to be both fabulous and terrifying, and I’m pretty sure I pulled it off. 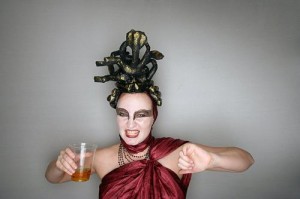 So now, rock out! Happy Halloween!!!