My mother, brother, and I have been big fans of Terry Pratchett for years now. It has become tradition the last few years that my brother sends me the new Pratchett for my birthday. This year, his new book is called “Snuff”. And Pratchett’s still got it. 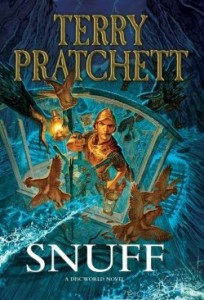 If you’ve never read any of the Discworld books, I’d highly recommend them. There are about a bizillion by now (ok fine. 39) and they’re all fun in their own ways. I’ve read the entire Discworld series.

And what is the Discworld you might ask? The Discworld is a fantasy world that is a flat disk, riding through space on the backs of four giant elephants, who in turn ride on the back of a giant turtle.

The stories are generally light and hilarious, with darker subtexts and adventures woven in. Pratchett is much like Douglas Adams of the “Hitchhiker’s Guide to the Galaxy” fame. They both write witty, fun, and fantastical books.

Reading “Snuff” made me want to start rereading the series. Now that winter’s hit, I’ve been having a hard time finding books to get into. Apparently comic fantasy is just what I wanted. Light, funny, and exciting. Just the perfect thing for standing in the rain at the bus stop.

“Snuff” is part of the City Watch series. There are many smaller series in the Discworld collection. Collections of books that follow specific groups of characters. The City Watch books are always fun. Commander Sam Vines is a great character and this book centers around him. When he is forced to take a vacation with his wife in the country, he is still able to find crimes that need to be solved and mayhem that needs to be stopped. It is a crazy wild ride and I flew through the book.

This is probably not the book that you would want to start with in the series. Here is the list of the City Watch focused books:

Personally, I love the Witch books, but some of my favorites are also the Death series. Death is a hilarious character.

Any way you slice it, the Discworld is a fun place to play. Grab one and get started. You’ll be amazed by the characters, the humor, the stories, the pop culture references, and basically, it will just be a good time.