I am obsessed with this recipe.

I have made it twice in the last two weeks and barely shared it with anyone. My man was out of town for work for much of the past two weeks and this is what I lived on. I happily had it for breakfast, lunch, and/or dinner. It was a little bit out of control.

But it is delicious! 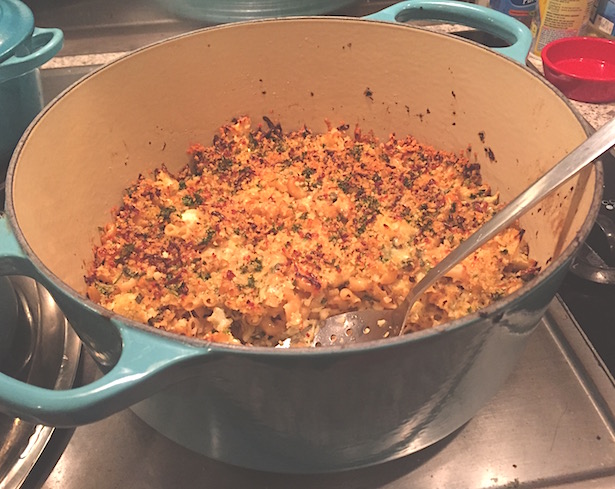 I couldn’t even take a picture before I dug right into it. Aaaaannnnd was too busy eating it to remember to take any later.

And it is such an interesting recipe. It is about half pasta and half cauliflower, with way more sage than it seems reasonable. But, trust. The sage is not overwhelming. It just makes the whole dish taste earthier. And capers in a macaroni and cheese? I never would have thought of it. But it brings a salty brightness to the flavor that keeps it from being heavy. The lemon zest brightens it as well. 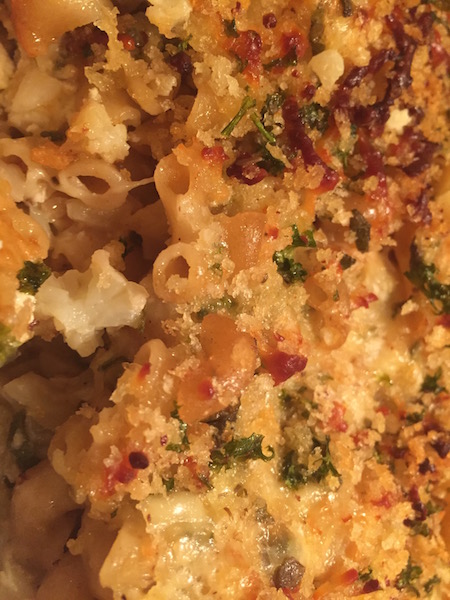 Look at that sexy close up.

The recipe listed below is the original Ina Garten version from the “Cooking for Jeffery” cookbook. (Man, that Jeffery is one lucky man.) The first time I made it was about a year ago for Thanksgiving. And for the record, I’m making it again this year. I loved it then. I love it now. When I first made it 2 weeks ago, I found myself thinking about dinner, with a head of cauliflower in the fridge and some ricotta that needed to be used. I remembered this recipe. I didn’t have any Fontina in my fridge, but I did have some cheddar. I figured, what the hell? So, I substituted the cheddar for the Fontina, used a little extra ricotta, and cut the sage in half. It was awesome.

When I made it again a week later, I followed the original recipe so that I could get a reminder of what it was supposed to be. And because I just wanted to eat it again. The Fontina makes for a creamier dish. The cheddar is a stronger flavor and the pasta gets crustier. I would recommend trying the original recipe and going from there. It is a great base to experiment off of. And, it is really easy to make!

Some further variations I discovered:

I made this with whole wheat pasta and it turned out great. It was an easy substitution that made me feel like I was practically eating a health food.

The recipe calls for you to sauté the cauliflower in a separate pan. I’m lazy and only wanted to dirty one dish. So, in one version, I used my large dutch oven pot, brought water to boil, and simply boiled the cauliflower with the pasta. Drained them both, and tossed both back into the dutch oven. Tossed in everything else and it was ready to go! Only one dirty pan! Granted, you don’t get quite the same texture in the cauliflower when you do it this way, it is softer and you don’t get as much caramelization. But, I didn’t think it made a significant difference to the final product, because when you bake it, you get so much crispiness built in anyways.

I hope you try this dish and enjoy it as much as I do.

Fill a large pot with water, add 2 tablespoons of salt and bring to a boil. Add the pasta and cook until al dente, according to the instructions on the package. Since it will be baked later, don’t overcook it! Drain and pour into a very large bowl.

Meanwhile, heat 3 tablespoons of olive oil in a large (12-inch) sauté pan over medium-high heat, add half of the cauliflower in one layer and sauté for 5 to 6 minutes, tossing occasionally, until the florets are lightly browned and tender. Pour the cauliflower, including the small bits, into the bowl with the pasta. Add 3 more tablespoons of olive oil to the sauté pan, add the remaining cauliflower, cook until browned and tender and add to the bowl.

Add the sage, capers, garlic, lemon zest, red pepper flakes, 2 teaspoons salt and 1 teaspoon black pepper to the bowl and stir carefully. Stir in the Fontina. Transfer half of the mixture to a 10 x 13 x 2–inch rectangular baking dish. Spoon rounded tablespoons of ricotta on the pasta and spoon the remaining pasta mixture on top. Combine the panko, Pecorino, parsley and 1 tablespoon of olive oil in a small bowl and sprinkle it evenly on top. Bake for 25 to 30 minutes, until browned and crusty on top. Serve hot.