I came across this recipe a while back in Giada De Laurentis’s cookbook. I had forgotten about it until randomly the other day when I was trying to figure out dinner. I knew I had leftover spaghetti that needed to get eaten and some glimmer of memory sparked and reminded of some crazy concept of fried spaghetti. And here we are! Pizza di spaghetti. 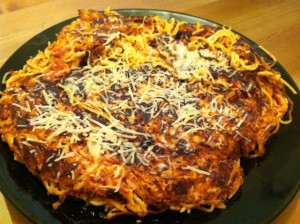 When I tried to describe this recipe to a friend, she said, so it is like a fried spaghetti omelette? Why yes. It kind of is.

Basically, you take leftover spaghetti, mix in egg and cheese, and fry until it is a big crispy noodley cake. 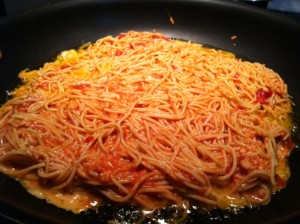 Newly dropped in the pan

I learned one important thing in this experiment. When it says to cook on medium, you really should. I think I tried to cook this too hot and ended up having to flip it before everything was set because it was getting too brown on bottom. That made the whole thing collapse a little and wasn’t as pretty or crispy as it could have been.

The other thing I learned while making this is that siratcha is key. When I asked my boyfriend how he would rate the dish he said that when he first tasted it, it was a 5, but after considering the omlette aspect and topping with some sriracha it went up to an 8. I think that if I had cooked the thing a little slower and longer, really giving it the opportunity to crisp up, it would have ranked even higher. 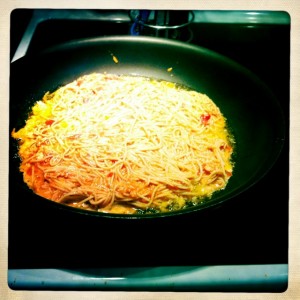 Try this fun way to do something different with your leftovers. I know I plan on trying it again.

And yes. I know this sounds crazy. At first I wasn’t sure why anyone would bother with the trouble, but as a vehicle to eat leftover spaghetti and some sriracha, it’s a win. 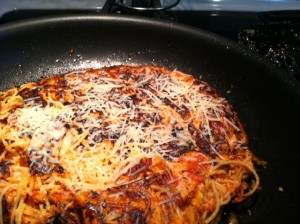 After I flipped it.

In a large 10-inch non-stick skillet, heat extra-virgin olive oil over medium heat. Add spaghetti and egg mixture, spreading evenly and pressing down in pan. Cook until golden brown, about 8 minutes. Carefully invert onto plate, add a little more oil to the pan, and slide mixure back into skillet and cook the other side for 6 minutes. (Be very careful inverting onto plate, as you will likely still have some very hot oil in your pan. I had to drain some of the oil out before I attempted the flip.)

Turn out onto serving platter, garnish with more cheese, cut into wedges and serve warm.