I have made enchiladas before and they are generally ok. They tide my Mexican food craving over until I can get the real deal. But not this weekend. This weekend, I kicked some enchilada ass! Did I use a recipe? No. It was all shear brilliance and blind luck on my part.

I made these randomly on Saturday night and they were so good, that we decided to make another batch on Sunday. 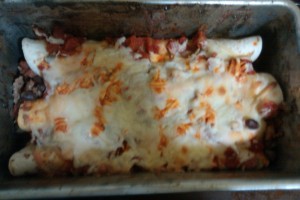 salt and pepper to season

I had purchased a 1.75 pound flank steak and marinated it overnight in soy, worcheshire sauce, with garlic, black pepper, and rosemary. (Now, if I had known when I was marinating it that I would be using it in Mexican food, I probably would have gone a different route, but it was still awesome and not noticeably weird or anything.)

Flank steak is cheap, tasty, and awesome if you do it right. It has a tendency to be stringy, but here is how to cook and serve it. Heat up a large pan on your stovetop with some olive oil until hot and starting to smoke. Toss in the flank steak and sear it well on both sides. Pull it and let it sit for 10 minutes under foil. Flank steak should be left fairly rare. Then you slice it thinly against the grain. I then chopped half of it to add to my enchiladas. (The other half I saved for sandwiches, then ended up making into another batch of enchiladas).

For the filling, I chopped up a large clove of garlic and sauteed it with some olive oil. I then added a can of chopped green chilies. Once that was mixed and cooking, I added a chopped large tomato. And once that has started to cook down, I added a can of drained and rinsed black beans. Then add seasoning. I added about a teaspoon of cumin and 3/4 teaspoon of chili powder. Also, a generous shake of the red pepper flakes. These measurements are very approximate. Spice it up as much as you want!

While the beans are cooking, shred up about 3 oz of cheddar cheese. Put it in a large bowl. Add 2 oz of goat cheese. Once the beans are ready, toss them in with the cheese and add the steak to the bowl. I then added a generous handful of shredded mozzarella that I had around. I’m sure any other creamy white cheese would work.

If I had had salsa at the house, I probably would have just poured it over the top. But, I didn’t. So, I had to make a enchilada sauce. What did I come up with? I poured a can of rotel into a small pan and cooked it down a bit. I added black pepper, some more cumin and chili powder, and once it had cooked a bit, I used it as my sauce.

I used two greased loaf pans instead of one large pan, so that I could freeze half for dinner another night. I used 6 flour tortillas. I filled each one, rolled it, and put it in the pan. Once they were loaded (three in each pan), I covered with the rotel sauce, another handful of the mozzarella, and another oz of the cheddar.

At 350 for about 15 minutes, or until the cheese is melty and filling is oozing out the ends of the enchiladas.

Let me tell you, these enchiladas are killer! I think you could probably use sour cream instead of the goat cheese, but the cheese did give it an extra awesome gooeyness.

My man and I agreed, these were the best enchiladas we’ve had in Seattle!

I hope you make some up and enjoy!