Updated May 1st, 2013. I finally remembered to take a picture! 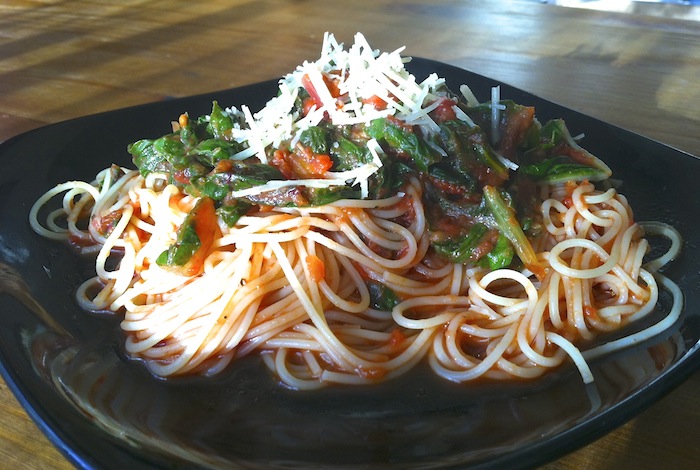 For Lent this year, I decided to give something up that I could continue to do after the Lenten season was over. Instead of the crazy operation vegetarian mission that I did last year, I have gone smaller scale, but more sustainable. I’ve hopped on the bandwagon for the new “Meatless Monday” craze. So, for the last 4 weeks, I have been without meat at least one day a week and I’m loving it. I think it is something I can really do all the time.

But, few of the meals I’ve made have been super exciting. They are tasty and nourishing but not “wow” dishes. Until this one. 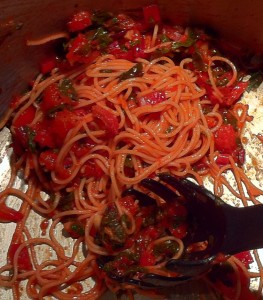 As I was making this, I was thinking that eh, it should be pretty good for a vegetarian dish. I had my neighbors over and offered to feed them and to my surprise and delight, everyone loved it. Words like delicious and amazing were thrown around. This was totally awesome.

I found this recipe on “Pink of Perfection”, which is a food blog I quite like. Apparently she found it on Epicurious. I’ve made a few changes, such as using angel hair pasta instead of penne, more tomatoes, and adding some parsley and oregano, but that’s about it!

I didn’t think I’d love it so much, so I didn’t take any pictures until after we had eaten and this was all that was left! 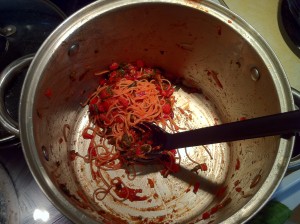 Rinse and drain the Swiss chard. Cut the stems out of the leaves and chop both separately. In a large heavy skillet cook the red pepper flakes and the garlic in the oil over moderate heat, stirring, until the garlic is pale golden, add the stems and 1/4 cup of water, and cook the mixture, uncovered, for about 5 minutes, or until the stems are just tender. Stir in the tomatoes and cook the mixture, stirring, for about 3 minutes, or until the sauce is nice and bubbling. Add the chard leaves, oregano, and parsley and turn down to a simmer. Cook the mixture, until the leaves are tender and the tomatoes are nice and saucy. Salt and pepper to taste.

While the chard is cooking, in a kettle of salted boiling water cook the  angel hair and drain it in a colander. Toss it with butter. In a large bowl toss the pasta with the chard and tomato sauce and serve it with the Parmesan.

And then enjoy! You’ll love this.